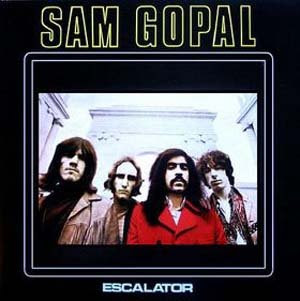 You might have noticed me mention Motorhead once or twice on this blog... so you might think that I was a bit of a fan. From 1979 when I first heard Overkill until 1984 when they released No Remorse (a compilation with four substandard new tracks on it) I listened to precious little else. I bought everything, I had obsucre 7" singles on Swedish bootleg labels, I had multiple copies of the No Class single so I could have each of the three different sleeves, I even bought No Remorse in it's (mock-) leather sleeve. I also owned this book which was a short but thorough compendium of pretty much all you wanted to know (including the existence of obscure Swedish bootleg 7" singles).

The book had a short section on Lemmy's pre-Motorhead career - of course Hawkwind were mentioned and it was fairly easy for a fan to fill in his collection with Hawkwind's Lemmy-era releases. Also mentioned was the psych rock band Sam Gopal but that was less easy to track down, and to be honest I wasn't sure whether it would be worth the effort so didn't really bother. Over the years I pretty much forgot about it even to the point that when a friend sent me the Damage Case compilation I didn't even notice that there was a Sam Gopal track on it.

Then on last Sunday's Freak Zone, Stuart Maconie dug out the Sam Gopal album that Lemmy played on (Escalator) and played a track. It was fairly typical psych-rock all fuzzy guitars and with Sam Gopal himself playing the tabla, but on top of all that was Lemmy. I had assumed that his contribution to Escalator would be as a young buck learning his chops. But no, Lemmy sings the whole album, plays that fuzzy guitar over the whole album (and apparently wrote most of it too). This is like a lost Lemmy solo album!

It's not a classic, not by a long chalk, but it's not that bad either, it's rough and loses it's footing periodically but I'm sure I'll go back from time to time.

I love living in the future!

Oh... and here's me with an obscure Swedish bootleg Motorhead 7"!