50 albums: 2002 - Castaways and Cutouts by The Decemberists

I've had a funny relationship with The Decemberists, there was a short period when I played them relentlessly... and then stopped, almost as suddenly as I had started. But even when I was playing them I was clearly having difficulties reconciling my relationship with them.

I ranted when Colin sold his autograph for $10

and I ranted when it finally all came to an end for me and them at the Shepherds Bush Empire in 2007. 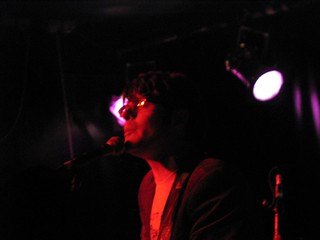 Thirty months previously I had seen them play their first London show at The Water Rats, it was a thrilling gem of a show and one I'll always remember fondly. They finished with a stage-trashing version of I Was Meant for The Stage... and then Colin stepped out amongst the wreckage for Apology Song. My camera battery ran out so I only have a couple of pics and a short video to remind me.

Today I listened to Catsaways and Cutouts possibly for the first time since February 2007, I enjoyed bits of it but was quite relieved when it came to the end. I think I prefer their next album better, probably their next two, but I'm not really in a hurry to revisit them just yet, I'll give it a while.