Just Dug This One Out #3 - Palace Brothers 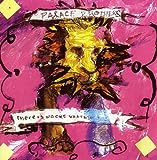 I bought this album when it was released in the summer of 1993 based on some rave reviews in the British music press.

Quite unlike anything in the US indie-rock scene--insane, minimal and beautiful
NME - 26th June 1993

You'll not hear another record like this until they make one....extraordinary
Melody Maker - 12th June 1993

I listened to it a couple of times and couldn't get my head around the sparse, country arrangements and Will Oldham's strained and fragile voice. I knew it was good and original but I couldn't get past my own difficulties with it. I promptly filed it away and forgot about Palace/Will Oldham until, as Bonnie 'Prince' Billy, he released "I See A Darkness" six years later.

Going back to There is No One... has been a strange experience, I'm still uncomfortable with all that bothered me first time around, but this time that discomfort is tempered by Will Oldham's subsequent work, and within the context of that, it starts to sound like what I guess it was all along a unique and fascinating album of country washed guitar twang with Will Oldham's voice providing a perfect.

I don't think it'll ever be something I listen to as much as Darkness or Ease Down The Road but it's an album that I have finally come to terms with.