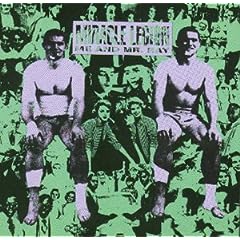 Ken turned me on to Miracle Legion and I picked up a CD of Me & Mr Ray at an indie record shop in Epsom and over the next months filled in a collection. This is probably my favourite though (actually...no...thinking about it now Surprise Surprise Surprise is much, much better) , probably because it was the first album I'd heard and because it was just Mark and Mr Ray when we saw them that first time being supported by The Breeders.

It's another album (and this series is filling up with them) that has slipped off my radar so it was quite peculiar going back to it - it still sounded good but Mulcahy's delivery grated after a while. The songs I remembered liking first time round, "Ladies from Town" and "If She Could Cry" I felt less comfortable with than I had back then but "You're the One Lee" and "Old and New" still sounded exceptional (although the woo woo woos at the beginning of the latter had me leaning for the skip button).

Brian recorded the demos for the first album "Understand" in a crappy house just off the Hanger Lane Gyratory System (as it was called back then I think it might just be a "junction" or a "roundabout" now) we set up all the equipment in the damp smelling living room and while Ken and Niall pulled together the songs my task was to try and get the hang of the Tascam Portastudio, Alesis Quadraverb and a drum machine proficiently enough to get decent enough recordings onto cassette.

One long afternoon/evening session descended into farce as Niall and Ken started bickering over the intro to a song that hadn't been written - one (and I can't remember which one) of them wanted to have a spoken intro like "If She Could Cry" has ("Shall I tell you how it is?...I'll tell you how it is...) the other didn't and what started as one of them voicing a half-baked idea descended into bickering, shouting, storming-off to the kitchen, long charged silences, more storming off...

Eventually we withdrew to LA Pizza and laughed at the idea that a band could fall apart over the intro to a song that hadn't even been written. At that moment I was, as Ken would later often point out, Brian's Derek Smalls - I was the lukewarm water between them.

When Understand was finally released there was no song with a spoken intro and Niall (Nigel Tufnell?) was no longer a part of the band.