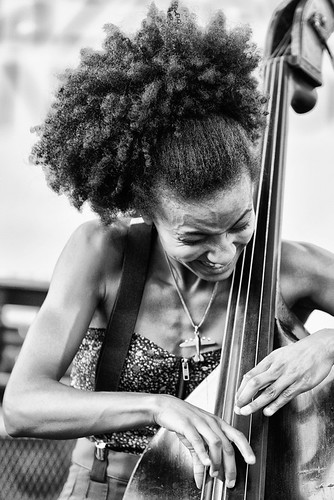 Back in Feb/Mar I took an online course (a MOOC) in "Jazz Appreciation" and one of the methods of teaching was a set of multiple choice "Jazz Facts" that were relentlessly and repeatedly served to you in an effort to get them into your long0term memory. One of these questions was "Who won a Grammy for Best New Artist in 2011?" - the answer to which was Esperanza Spaulding. This bit of the teaching gave us no insight into anything about Esperanza except that she won that Grammy (and in another question that she was a bassist/vocalist), so it seemed only fair that I give Esperanza a listen and picked her second album Esperanza from 2008 as a decent starting point.

Of course, having taken a "Jazz Appreciation" course means that I should be able to go beyond "I liked this" or "I didn't like this" and start discussing the style, the instrumentation, the form, and other aspects of the music. I, of course, don't have the confidence (and am not sure the course gave me the skill) to assess music in that way, so...

I hear drums, bass and piano. Esperanza's voice is clear and soulful. The music is generally smooth with a Latin feel. A couple of numbers have a saxophone, and one these She Got to You I like quite a lot (all the live clips on YouTube has her performing it with an electric guitar instead of a sax, and I'm not sure I like that so much!)

Mela, has the addition of a trumpet, and it might be my favourite song on the album, maybe because of that. Here's a live clip... with no trumpet - oh jazzers constantly messing about with your formula!

I quite like the album, not sure that it's something I'd go back to often.