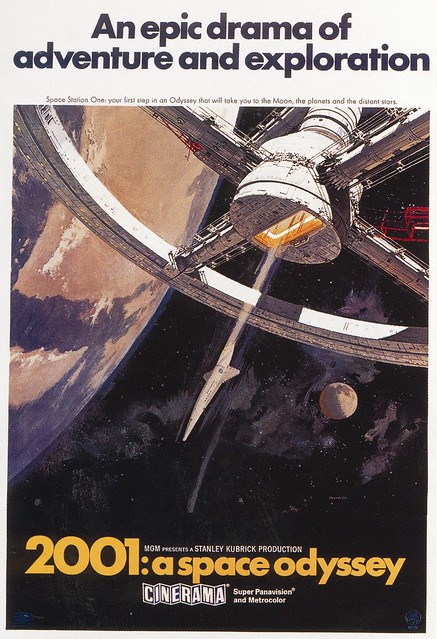 I don't like Kubrick's films. I was disappointed in The Shining (mostly because I had loved the book so much), am baffled by the Strangelove love and A Clockwork Orange is just hatefully unpleasant. For all those reasons I had decided that I wouldn't like 2001 and managed to reach 50 without ever having seen it.

However I love film (and have a fondness for sci-fi), and it's been preying on my mind lately that there is this supposed classic sci-fi film I haven't seen, so when the BFI offered free tickets in a members event I felt obliged to go.

I genuinely tried to view the film with an open mind (and I was eased into the mood by the Jan Harlan being so funny and knowledgeable and charming in the Q&A beforehand)...

... but it's painful, pretentious toss. There's a technically brilliant middle section, with some nice model work - but even that's bordering on the tedious. I am fond of a story that burns slowly, but this didn't really burn. What little story there was was telegraphed early and delivered in such a way that it even made me tired of the model work (and I love models!). And then the last 20 minutes completely killed any love that the technical wonders had generated.

The music and sound were mostly brilliant.

I'd rather watch Gerry Anderson's model work, Space: 1999 had all that with excitement and a story wrapped up in less than an hour.